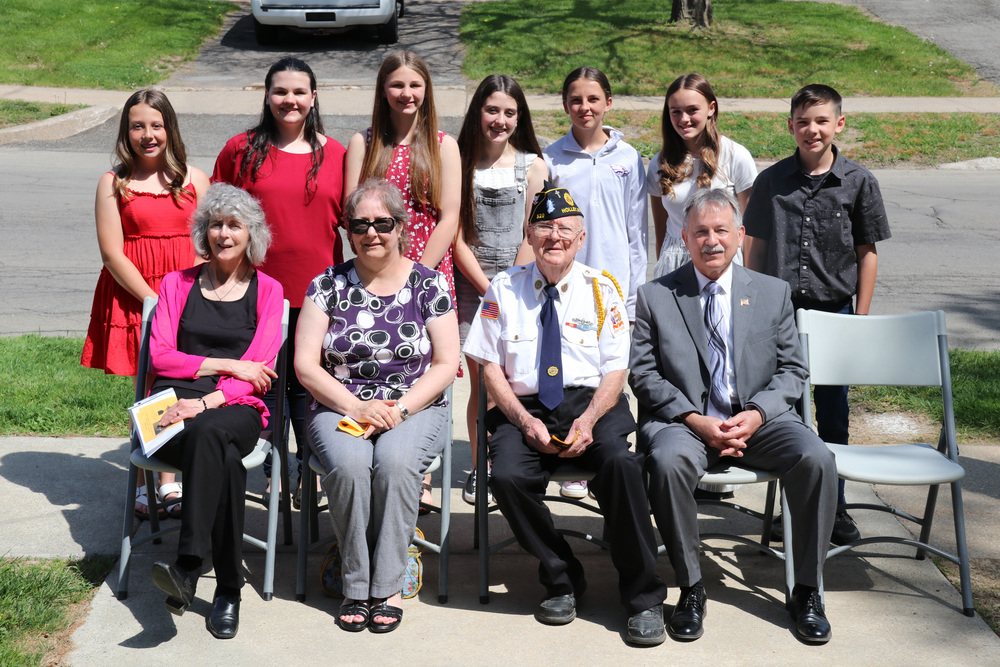 Sheret family:
The Sheret family was a remarkable example of sacrifice and loyalty to their beloved country in a time of international need. Very few examples of patriotic loyalty can match that offered by this West Park St. family.

John and Anna Sheret had nine children, seven of which served their country nobly – two offering the highest level of sacrifice. Brothers James, Egbert, and Andrew – all in the Army, and John (a naval aviator) were among the first Albionites to enlist in “The Great War” – WW1. Younger siblings Virginia (Lt. Col. in the Army), Donald (Private First Class in the Army), and Bernard (Major in the Air Force), followed in their footsteps in World War 2. Virginia had the distinction of holding the highest rank ever attained by a woman at that time.

James and his brothers enlisted on March 20, 1916 in Medina as part of the 27th division of the American Expeditionary Forces, 108th Infantry, Company F. James was a corporal, Egbert a private, and Andrew the company bugler. James, age 25, was buried eleven days after his death, about 100 miles northeast of Paris in the Somme American Military Cemetery – Grave No. 93, Plot F, Row 4. Egbert was placed in the same cemetery – Grave No. 127, Plot G, Row 5.

What must it have been like for Mr. and Mrs. Sheret on April 1, 1919 when the survivors of Company F returned home to a hero’s welcome? There was the joy of seeing their son, Andrew, though severely wounded, home alive…and yet the terrible sorrow of knowing they will never see their sons James and Egbert ever again.

What was younger brother Andrew feeling, then only 19 years old, who left his brothers behind in France? Their bodies would not return to the United States until April 1921 under military escort, after being shipped from Somme American Cemetery to a Hoboken, New Jersey port on the transport ship Cambrai. A belated double funeral would be held two days later on April 13 at the Presbyterian Church in downtown Albion, where the family regularly attended services.

Gen. John J. Pershing aptly said, “Time will not dim the glory of their deeds.”

With great sympathy and gratitude we thank the Sheret family for their sacrifice.

Funeral Letter
This is an extract from a letter written by Mrs. James L. Gay of LaSalle, NY, who knew Mrs. Sheret and attended the funeral service of the Sheret boys in April 1921, after they were sent home from France.

“I will tell you about the military services I attended. Anna Sheret wrote us that the bodies of her two sons, James and Egbert, who were killed on the Hindenburg line, in France, Sept. 29, 1918, would arrive in Albion, April 10th, and the funeral services would be Wed., April 13 th at 2 p.m. One casket was metal, the other was oak, and the government sent two wool flags, 10x15. They said the government paid $60 each for them. I never saw such beautiful flowers as were sent in from friends – roses, carnations, besides flowers at the church. In the

funeral procession were two white hearses and eight pall bearers for each casket. They marched at the side of the hearse.

At the head of the procession marched Red Cross nurses carrying flags with black ribbons tied on staff, and then the sailors and soldier boys, dressed in their uniforms. The friends were taken in fine automobiles to the church, where the nurses, sailors and soldiers stood outside and gave their salute. When we came out they stood in line and were taken to the local cemetery. They were buried side by side. The soldiers fired a salute and the buglers played the burial service. The chaplain of their company was there and made some very touching remarks about their bravery. One was killed in the forenoon and the other in the afternoon. The captain gave each one of their company a rose or flag, and all who were sent back dead, a beautiful floral pillow. The mother of the boys was very brave, as were they all.”

The Distinguished Service Cross was established by President Woodrow Wilson on January 2, 1918, and was first awarded during WW1. James Sheret was one of only approximately 6,000 recipients of this honor during the Great War.

The citation for Sheret states: “During the operations against the Hindenburg Line near Ronssoy, France, on September 29, 1918, this soldier displayed exceptional bravery in several single-handed attacks on enemy positions. After rushing two hostile posts and killing the occupants with his revolver, Sergeant Sheret attacked four of the enemy in a machine gun nest, killing one of them before he was surrounded and killed by the other three.”

General John “Black Jack” Pershing considered James “one of the hundred heroes of World War I.

James and Egbert are also included in the Aberdeen and District “Roll of Honour” at the National Library in Scotland.

Central Hall, where the panel is now on public display, was once an American Legion Post and was renamed Sheret Post in honor of the brothers who died on the same day during World War I. 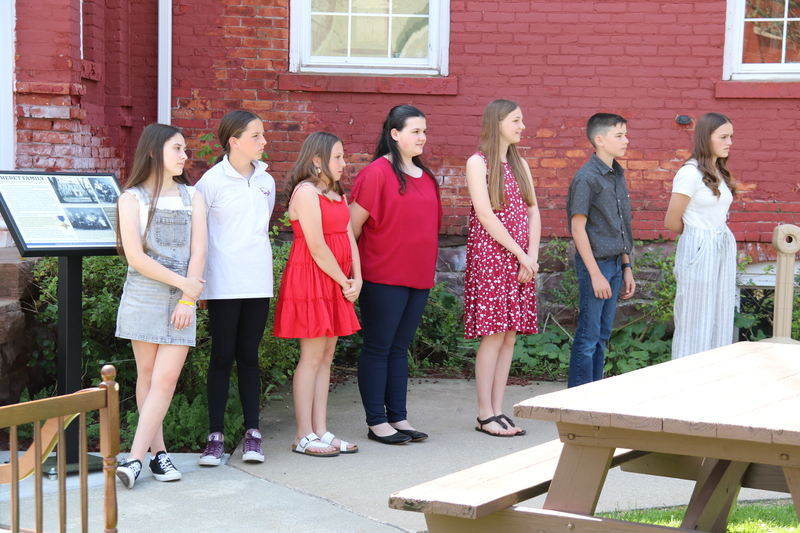 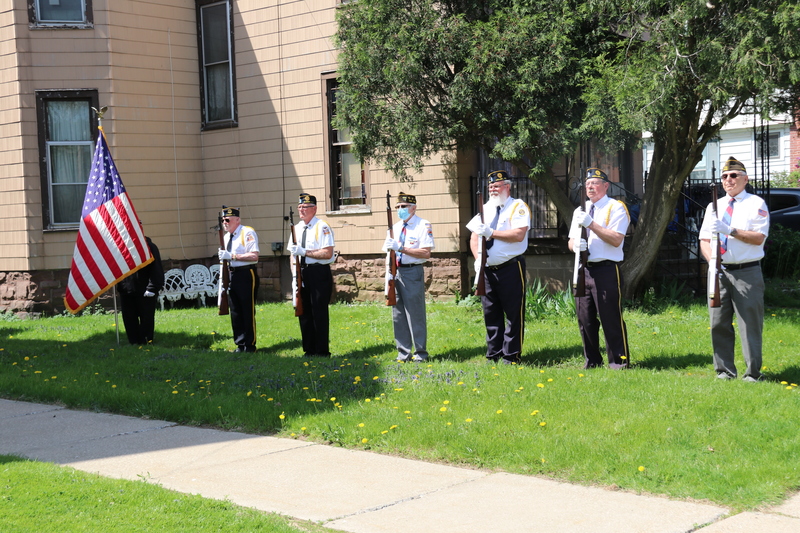 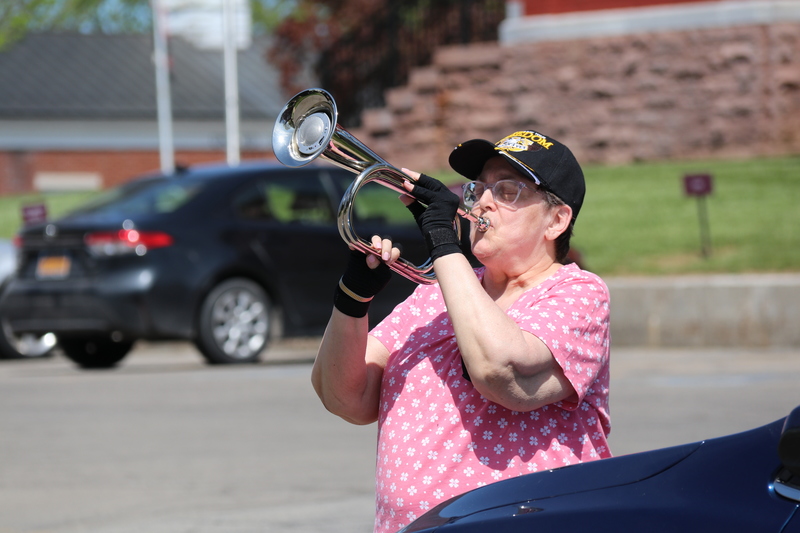