Josefino Paz: The Life of a Dedicated Teacher

Recent graduate Faith Bennett interviewed ESL teacher Josefino Paz for an assignment in Mrs. Roche's creative writing class. Thank you to both Faith and Mr. Paz for letting us share this compelling story.

In late May, I was given an assignment in my Creative Writing class to interview someone in the district and write a brief summary about their life. I was not certain who I wanted to interview; something told me that Josefino Paz would be a good person to write about. Mr. Paz agreed to sit down with me for a fifteen minute interview. After hearing only a portion of his story, I knew that this needed to be more than just a short summary. We sat down again the following day and he shared with me a journey full of fear, hatred, compassion and determination.

Josefino Paz works in the Albion school district as an ESL (English as a second language) teacher. He is often seen with his backpack on, traveling back and forth between the middle and high school, with a smile on his face. Mr. Paz enjoys teaching students English, while learning from them as well. Aside from his kind heart and positive attitude, Josefino has experienced a life most of us simply could not imagine. Josefino was born in 1968 in San Juan Mixtepec, Oaxaca, Mexico. He grew up speaking Mixtecan, a language that is spoken but not written. Josefino grew up with five brothers and five sisters. In a small household of thirteen, Josefino shares that his life as a child in Mexico was fun. “We had a hut and we all shared the same room. We didn’t have real beds but we had palm that was woven into a mat. Three or four kids could sleep on a mat.” Josefino’s favorite game as a kid was “Intiquine" or “Squirrels”: a game which involved climbing up, then jumping from tree to tree. He and his siblings would play this game for hours and never get tired. Josefino loved his childhood. He recognizes now that it certainly wasn’t a glamorous life, but they were happy.

In the village, there was only elementary and middle school. As a boy, Josefino’s teacher had given him a “time table” or a multiplication chart. He quickly memorized it and found reciting multiples as “fun”. After the completion of eighth grade, Josefino wanted to learn more. He reflects on how his parents were suffering at this time, struggling with so many mouths to feed. Josefino’s older sister attended school out of the city; a taxing load on the family. Mr. Paz tells me that he no longer wanted to be a burden on his family and an extra expense. “I heard people talking about the United States, but I couldn’t picture it”, Josefino tells me. In July of 1983, Josefino headed to California with a small group of others. Josefino recalls a shocking moment during travel while laying at the bottom of a freight train. “Laying under the train made us sleepy. We fell asleep under there, and when we opened our eyes, the guys on the other side were missing”. Josefino was only inches away from being deported. He planned to work for six months then come back to his village with money. But, reality was different. “It wasn’t easy to make money. It took me a while to find employment because the first thing they asked you was to get in a team of four or five”, Mr. Paz says. He explains to me that he was only fourteen years old; no one trusted his work ethic. Paz eventually made a team with elderly people. Work would start at 6:00a.m, but Josefino shares with me how he and his team would get there hours earlier. “You had to beat the others if you wanted to work”, says Paz. Fourteen year old Josefino and his team would arrive at 2a.m, sit on a tractor and wait for the day to start. Young Josefino had never operated a tractor before, but his eldery group figured he could do better than them. “I couldn’t move my tractor. I was stepping on different things and nothing was working. The leading farmer was angry at me; we didn’t work that day”.

Despite his initial difficulty in his first few weeks at work, Josefino tried working in a grape orchard. The working immigrants would use incredibly jagged and sharp knives to cut the vine above their heads. The very first time Paz cut a bushel of grapes, he cut his finger to the bone.

Unfortunately, this injury would leave Josefino out of work for about two weeks. With no home, no money, and no work, Josefino would have to hide in the orchard until he was healed and able to work. Josefino was grateful when he was able to work again, but he remembers it being a vigorous job. “You had five or six hours to work, and you got paid for how many baskets you filled. When you finish a day, everything on you is dry and sticky; you look like an alien when you leave.” Along with the other workers, Josefino would bathe in a nearby canal. During the five years he spent in California, Paz was deported twice. I asked him what made him come back again and again. He tells me. “I had to, for my family and for me”. In 1988, Josefino heard that the apple season was good work in Albion, NY, so that is where he went. Paz tells me that he actually enjoyed picking apples compared to his work in the grape orchard. Now, he was twenty years old and a good, fast worker. But as the season ended, work died down. His friends left Albion to continue to follow work. Josefino thought about leaving too, but he heard that there was an ESL class in Brockport. So he stayed. I asked Mr. Paz what made him want to learn English so bad that he would risk not making money. He tells me, “ I encountered many situations where I couldn’t communicate with people.” He recalled a time where he was questioned by police officers, not knowing what they asked of him. “Maybe they were nice, maybe they were mean, I didn’t know. I would spend hours with them, confused, not knowing what they wanted.” Josefino began taking an ESL class in Brockport, then went on to take classes at Monroe Community College. Josefino dedicated most of the money he had earned to school. Although, Josefino Paz was not a registered student. This meant that he was paying for classes, whilst receiving no actual credits. He would have to gain thirty credits prior to enrolling as a student at MCC. Paz worked Monday through Saturday, and would attend class at night. There were times where he almost fell asleep in class. It took Josefino eleven years to complete his Bachelor's degree.

After gaining his hard earned degree, Paz worked at a migrant education program. “At one point I wanted to be a psychologist or a lawyer, but I knew it wasn’t practical.” Josefino was curious about how people think and learn. He says that he wanted to help and inspire people. Caesar Chavez was a civil rights activist for agricultural workers and he stood as an inspiration for Josefino. “But, I realized I had to have a lot more school and I was too far from that”. In the early 2000’s, Josefino attended Nazareth College for his masters degree. He was in his forties when he received his teaching degree. Mr. Paz had thought about being a math teacher. He remembered passionately studying his times tables back home in Mexico and memorizing them. He had always liked math. He decided not to pursue a career in math based on his experiences. “I am realistic with what I see and what I encounter- most math teachers were white males and I thought that if I was a minority, I might not be welcomed.” Josefino was hired at Albion as an ESL teacher, I asked him if he is happy with his career, or if he has any regrets about his past and decisions. Mr. Paz tells me he’s in a really good place. He loves his job teaching English to not only Spanish speaking students, but kids from India and Pakistan as well. “You learn to communicate without speaking the same language. You can help anybody if you want to”, Josefino tells me in regards to his career. Mr. Paz uses many strategies to get messages across like using gestures or sounds.

If Josefino wants to teach the word “run”, he will run around the room. If he wants to teach the word “laugh”, he will laugh, and the students will laugh with him too. I asked Josefino why he thinks he’s a good teacher. He says, “I’m not just a teacher, but someone who can relate to the kids I see. I used to work in the fields like how some parents of the children do now.” Josefino’s past experiences are an example of how staying dedicated and determined despite the obvious obstacles can build a better life for you.

Josefino has worked exceptionally hard to build the life he has now. Spending over fourteen years in college, he is thankful for the community and his job at Albion middle and high school. Currently, Mr. Paz is working on putting his first language, Mixtecan, to paper. He hopes to publish something in the future. I am glad I had the chance to meet with Mr. Paz and hear his story. At the end of our interview I asked him if he had anything else he would like to share. He said, “Appreciating diversity allows you to grow up. I would encourage people to step outside their comfort zone and visit other countries.” Josefino Paz tells me that he is still considering law school. 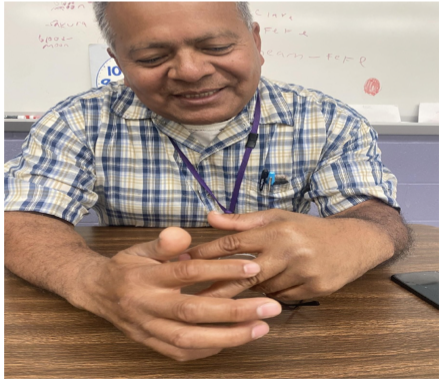 Mr. Paz shows Faith the scar he still has from nearly forty years ago