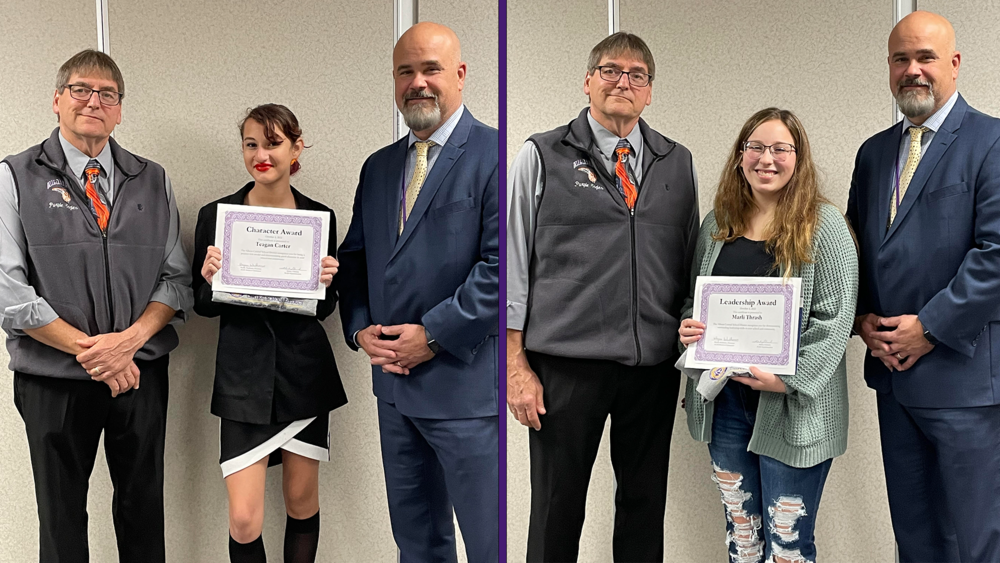 The first recipients of the district's character and leadership award were recognized at the October Board of Education meeting. Freshman Teagan Carter received the Character Award while senior Marli Thrash was honored with the Leadership Award for their conduct throughout the first month of school.

Character Award: Teagan Carter
"Receiving the character award this evening is Teagan Carter. Teagan is new to the high school this year as an incoming freshman. She was nominated by her English teacher, Mrs. Conde. In her nomination, Mrs. Conde commends Teagan for the hard work she has put into the beginning of her high school career. 'Teagan worked hard to improve her grade in learning lab, and she is advocating for herself more in English class. She brings positive energy to the classroom, and she is ready to participate in discussions and classwork.' Mrs. Daggs describes Teagan as a 'very expressive and artistic young lady. She is a role model for many of her friends and offers them alternatives to deal with tough life situations. She is a pleasure to work with.'

Congratulations Teagan. I look forward to watching you continue to grow as a person and student of strong character." -Principal Ashbery

Leadership Award: Marli Thrash
"Marli was nominated by visual arts teacher Mrs. Burgett. In her nomination Mrs. Burgett notes, 'I’ve heard only positive things being spoken from Marli’s mouth.' She continues on to describe Marli as someone who is quick to defend others and is a great encouragement to many students in the classroom. Mr. Brooks, another of Marli’s teachers, describes Marli as a 'very driven student- her work is of the highest quality, and she shares her opinions and participates in class in a respectful manner.  She is always kind to others and has a smile on her face.'

Marli, you remind us all that leadership takes many forms, but ultimately rests on the foundation of respect and kindness. Thank you for the leadership you provide at Albion High. We are incredibly proud of you!" -Principal Ashbery